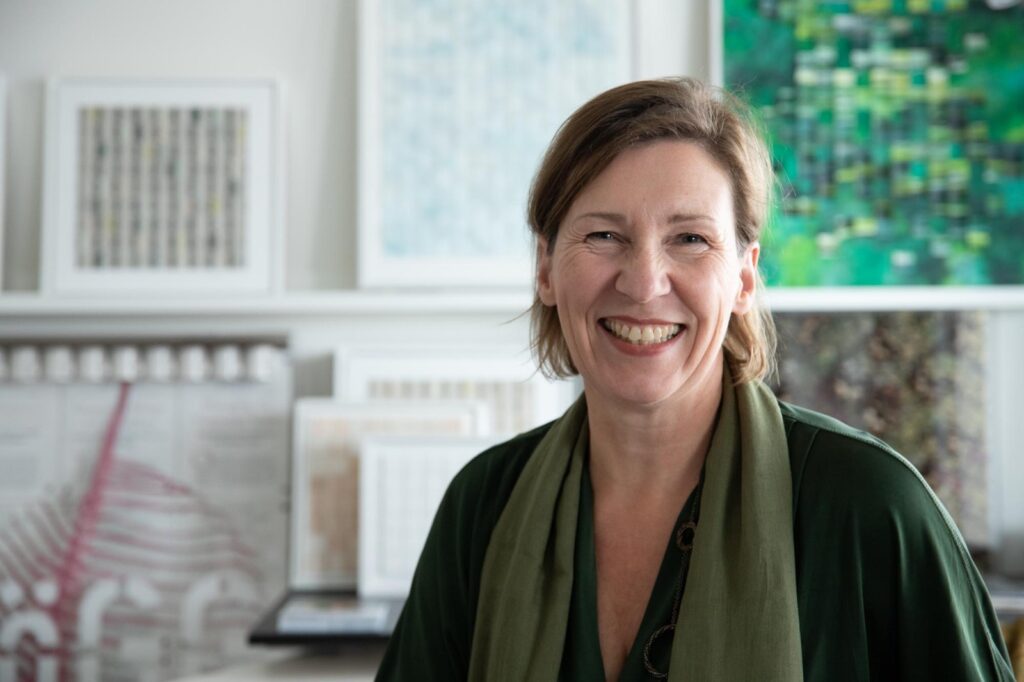 Paméla Maria (1965) has been drawing ever since she was a child. She studied classical arts at the Academy of Fine Arts in Hasselt (Belgium) and obtained her certificate in 1983. She then studied Industrial Design at the Design Academy Eindhoven, first studying at the textile department and then at the environmental design department, obtaining her certificate in 1989.

In 1990, she received a starting grant from the Dutch Government via the Mondriaan Fund for the further development of her work.

In the subsequent years, Paméla worked as a designer and consultant for various Dutch municipal authorities and company’s.

In 1998 Paméla chose to focus on her original passion: the visual arts.

She lives and works in Amsterdam, the Netherlands. Her work is on show in solo and group expositions internationally at gallery’s and artfairs. She also works on commissions.

Her background as a designer can be recognised in her artworks: the ease with which she works with various materials; the perfection; the graphic character; the investigative and experimental character of her work, the photographic eye. Usually she works on several creations at a time. In this way she can perform, think, experiment and watch at the same time which for her results in a wonderful working flow. Every work is the result of trying and experimenting with form, material and colour.

She explores the beauty of the every day through an optimistic attitude, investigating a dialogue within herself. The theme ‘nothing is what it seems to be’

is another theme in her work.

“Art is a discovery of who you are and a confrontation of the soul with the delusion of the day. By focusing on the beauty of the every day and the layers beneath it, I distract myself from the pain and sorrow that burns inside.”

Nature is an important source of inspiration: her eye is captured by details in the (urban) landscape. Zooming in on the endless wealth of patterns, structures, colour shades and light in the (urban)landscape. The works depict how these impressions slide over each other and yield new compositions with endless colour shades. This is used intuitively and investigative.

“For me, working is a changing process: from reality to geometric or expressionistic proportions. The seemingly flat surface changes into a relief with several dimensions. The yarn picks up details, directs the eye and adds a third dimension”

The development starts with the spatial objects: the so-called assemblages from the nineties and ’00s, in which dreams and associations were captured in three dimensions. Story-boxes which depict the idea of the apparent contradiction of reality: ‘nothing is what it seems to be’.

The smaller story-boxes, which are documented in the book “Pamdorado”, are as a diary, a sketchbook and an associative, poetic song of praise to the world around her. From the everyday of litter, children’s toys, paraphernalia from markets and holidays to personal memories (wedding ring, broche of grandmother).

‘Glögg’ is a key work: from that point the works developed from surrealistic to abstraction with the reliëfs. ‘Me too’ (2006) and ‘U zoekt iets’ (2005) are typical works for the transition period.

The reliëfs are made with yarn, acrylic paint and paper/photo that portray the tranquil landscape of Holland. The seemingly flat surface changes into a relief with several dimensions. The subtle use of colours and detailed texture is characteristic for the translation of reality and determine the character of the work.

For example: The ‘Reflections’ and ‘Moving’ series for example are inspired by how the water and the air influence each other and form an endless wealth of color shades. ‘Moving colours’ serie is based on tree stands of plane trees.

The series ‘Vertical City’ and ‘Twilight’ are rooted in the strict rhythm of (office) facades where the idea of space or foreground/background is not defined by shape or color, but only by the texture. The series ‘Shadows of pink (or white, blue, green) are reflections of the landscape in various seasons and period of the day.

-The ‘Rainy days’ works are made with acrylic painted paper and yarn in many shades of blue or green that portray the beauty of grey, wet days. Everything is light, we are surrounded by beauty. Nature is always beautiful.

Sometimes the image says it all. Like the ‘Lanzarote’ serie; images of details of the incredible landscape of the Island.